The early residents of this state were in the habit of providing for the wants of the poor and destitute in this manner. When application for the keeping of a person in indigent circumstances was made to the township trustees, they bound him for a certain term to the lowest bidder, who was required to give bond for the faithful discharge of his duty—feeding, clothing, and properly caring for his unfortunate charge. Thus were the poor well cared for, but not in accordance with the old abolition idea of the people, who looked with horror on the process of what they termed "selling human beings at auction;" however, because of the very few who required public aid, the matter could not be remedied.

Time rolled on, and with the tide of immigration did the number of destitute and helpless increase, making it apparent that measures providing for their care and comfort must be adopted. To this end, an act providing for the "establishment of County Poor Houses," was passed by the Ohio Legislature. Any county having within her limits a sufficient number of paupers, was empowered to purchase grounds and erect suitable buildings thereon, to which all the infirm and needy were to be admitted, and thus was the custom of selling human beings, as so many articles of furniture abolished forever.

For a period of nearly fifty years, after its organization, Fayette County had no public institution in which she could care for her infirm, but provided for them through her township trustees. In about 1850, philanthropic citizens agitated the erection of buildings for this purpose, and in 1853, the board of county commissioners were induced to take the matter under advisement. On the 7th of June, 1853, they resolved, that, in their opinion, "it will be proper and advantageous to the said county, of Fayette, to erect and establish a poor house, within and for said county, and that they deem it necessary, for the accommodation of such an institution, to purchase a tract of land, etc."On the same day, Hopkins Shivers, in consideration of three thousand five hundred and eighty-seven dollars and fifty cents, deeded to Jacob A. Rankin, Robert Eyre, and Micajah Draper, commissioners, for the purpose of the accommodation and erection of a county poor-house, for the County of Fayette, the following tract : Being a part of Robert Randolph's survey No. 119, and bounded, beginning at an ash and two water beeches; thence west ninety-six and four-fifth's poles, to an ash, redoak and dog-wood; thence north one hundred and fifty-four and one-half poles, to a stone in the center of the turnpike corner, to Richard Randolph; thence north seventy-two degrees, east with the center of said road, one hundred and one poles to a stone in road and corner, to Judge Jacob Jamison; thence south, one hundred and eighty-seven and one-half poles to the beginning; containing one hundred and two and a half acres, more or less. We have no means of ascertaining whether steps were taken at once for the erection of buildings, but presume that such was the case.

July 26, 1853, the commissioners issued an order to Hopkins Shivers for forty-five dollars and fifty cents, for furniture for the infirmary, probably taken from the house of Hopkins.

Willis Rowe, Joseph McLean and Wesley Wilson, directors, on June 7, 1854, presented to the commissioners their accounts for settlement, from the day they took charge—December 17, 1853—from which it appeared they had issued orders to the amount of three hundred and seventy-six dollars and fifty-two cents; two hundred and ninety-seven dollars and fifty-two cents of which had been issued for articles for the use of the farm and houses. Seventy nine dollars were paid William McLelland for his services as superintendent of the institution. Willis Rowe was allowed a dollar and a half per day, for nine days, and one dollar for expense "incurred in going to Wilmington to procure information in regard to the government of the institution." Joseph McLean was allowed one dollar and a half per day, for eight days' service ; Wesley Wilson the same for six days.

In the meantime, work on the new structure progressed satisfactorily, and on the 25th of December, 1854, the board examined the wood-work, pronounced it executed according to contract, and issued an order for one thousand two hundred and sixty-seven dollars and forty-two cents to Thomas Dollarhide, the contractor.

May 16, 1855, upon examination, it was ascertained that the plastering had been well done.

On the 4th of June, 1855, Joseph McLean, Wesley Wilson and George Fullerton, directors, submitted their annual report for the year ending June 1, 1855, from which we extract:

At the commencement of the year there were seven inmates; nine had been admitted since, four discharged; number remaining,—twelve.

The superintendent's term expired December 17, 1854 ; he was retained, however, till the first of March of the following year, at which time James Garlingor was appointed to the position.

The average expense of maintaining each inmate was one hundred and fifty-four dollars—unusually large, because considerable money had been spent in improving the farm.

At the close of the fiscal year, ending June 1, 1857, the directors reported twenty-seven patients during the year, of whom ten were discharged and two died. The total expense incurred in running the institution was one thousand one hundred and one dollars and eighty cents, while the credit claimed for products sold and stock on hand was two thousand one hundred and forty-one dollars and fifty-three cents; balance, twenty-seven dollars and fifty-five cents. It was hoped that ere long the same would be self-supporting.

From the above extracts can be gained an idea of the condition of the infirmary during the first years of its existence. Under the skillful care of the superintendent, Mr. James W. Garlinger, and the directors, the institution prospered from year to year until, owing to the constant increase of inmates, it was apparent that the present building and grounds would, ere long, prove inadequate for the accommodation of those for whom it had been erected.

Peter Carder, an old resident of this county, and owner of an immense estate, upon being informed of the necessity of a "new poor farm," and influenced by a truly philanthropic spirit, conceived the idea of donating a portion of his estate to the county for "infirmary purposes." 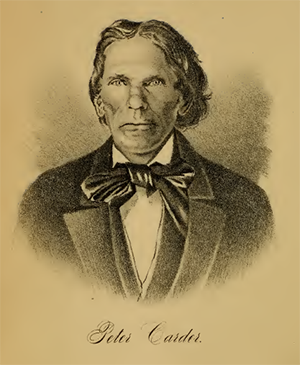 In the year 1863, shortly before his death, he bequeathed to the county five hundred and seven acres of his estate, as a home for the poor, the invalid and the unfortunate. After his death, his widow objected to the provisions of the will, and several years passed before the matter was compromised.

The county, in 1867, by its agents, commissioners "William Clark, William Jones and Allen Heagler, began the erection of the new building. The foundations were laid in the summer of the same year, and by 1869 the work was fully completed.

On July 7, 1869, the inmates of the old building, forty-seven in number, were admitted to the new infirmary, and henceforth the unfortunate of Fayette County have had a home excelled by few, beautiful in design and execution, costly in material and construction, and abundantly ample for their reception for a long time to come. Various estimates have been made regarding the cost of the building, which has not been much less than forty thousand dollars.

The infirmary is beautifully situated on the Columbus Pike, two miles northeast from Washington, C. H. Central as to the grounds, which are planted in their vicinity with a fine grove of young timber, and adorned with grassy lawn and flowering shrubs, the buildings may be seen for miles, half concealed by the intermediate foliage of the forest. The structure is four-storied, including basement and attic, and contains rooms for cooking, dining, sleeping, instruction and discipline. The dimensions by wings are one hundred and sixty-two by one hundred and forty-two. The basement is devoted to storage, heating and cooking. A broad corridor leads on the second floor to the dining-room, forty feet square. The south wing is devoted to rooms for ofiicials and reception of visitors. The wings are respectively occupied by the males on the east wing, and females on the west wing. Two rooms in each are known as family or sitting apartments, and beyond these are the sleeping rooms. Ascending a flight of stairs the third floor is reached, and here we find a school-room, eighteen by thirty-six feet in size, where it is designed a school shall be kept for six months annually. The first school was taught in 1874 and has progressed satisfactorily, furnishing means of information to the younger inmates, Northward, and over the dining-room, are three so-called family rooms, designed for sociality, and beyond are cells for insane and refractory patients. The east and west wings, corresponding with those below are used as dormitories. The hospital, eighteen feet wide by thirty-six feet long, attracts attention from its airy, clean and pleasant appearance. The attic is designed exclusively for dormitories.

The government of the institution is vested in a board of directors, and a superintendent appointed by them. Present board Thomas B. Thornton, president ; Thomas Larimore, secretary; William C. Eyre. Superintendent, T. J. Stinson; matron, Mrs. T. J. Stinson.

Recently additional land was purchased, and the farm now embraces five hundred and eighty-two acres, of which one hundred and thirty is in timber; the remainder is principally under cultivation. During the past year the sum over and above receipts required to run the institution, was six thousand dollars.

The superintendent, Mr. T. J. Stinson, is a man eminently qualified for the place, as is also the matron, Mrs. T. J. Stinson, they having held their respective positions for more than four years.

The regulations of the infirmary require strict accountability, faithful performance of duty, and full compliance with the directions of the proper otficers. Kind, mild, yet firm treatment, marks the control of the inmates, and Fayette County may well be proud of her public institution—the Carder Infirmary.